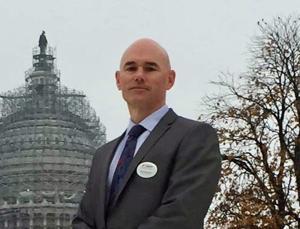 Brett Blanchard has officially started work as the new principal of Bellows Free Academy. “I could not be more excited to be part of the BFA St. Albans community and I look forward to working with the students and staff. I am honored to have one of the best jobs in the world!”

Brett was encouraged by his mother to pursue a teaching degree in conjunction with his History degree from Westminster College. After graduation, he lived and worked around the country. While in New Mexico he received a call about a job opportunity for The Woodhall School in Connecticut. The Woodhall School is a nontraditional school
for boys. Brett committed to The Woodhall School beginning both his career in education and his passion for realizing student potential.
During Brett’s time at The Woodhall School, he successfully built an athletic program, basketball court, and soccer field. In the early 90’s he moved to Vermont taking a position with the Poultney Junior and Senior High School as a Social Studies teacher, football, and track coach. Brett became Poultney’s Dean of Students where he began the all important task of building positive school culture through daily interactions with students.
In 2007, Fair Haven Union High School in Vermont asked Brett to apply for the principal position. Brett applied and spent 11 years dedicated to positive cultural and community transformation. He began transformation through amplifying student voice. Students were on every meaningful committee including hiring. Students revamped the cafeteria, library, and food system, developed clubs, and ran assemblies.
Despite the school’s forty-eight percent free and reduced lunch rate students, faculty and staff persevered to equip the school with a modern fitness center, media center, and expanded arts programs. Health and fitness became a focus as it directly correlates to student performance. Amplifying student voice paid off. Fair Haven Union High School transformed from one of the lowest-ranked schools in 2007-08 to a US News and World Report’s consistently nationally top-ranked high school. Reflecting further Brett
said: “We created more meaningful student opportunities. We drove increased skills and performance through student interest and opportunity.” He pointed out, “Teachers rose to the occasion to offer students more opportunity to excel academically through a variety of ways while seeking to integrate inquiry-driven learning.”
The past two years Mr. Blanchard was hired to combine two previously separate New Hampshire schools under one administration while integrating proficiency-based learning. Having successfully completed both goals while also instilling a student-centered culture, Mr. Blanchard is excited to make St. Albans his permanent home. Mr. Blanchard’s
father played fullback for Coach Bob White on the 1954 Shrine Bowl team and his Uncle, Gene MacCallum, is a graduate of BFA. With his oldest son living in the area, Mr. Blanchard is looking forward to working with the staff and students of BFA while also being a member of the greater community.
Brett brings decades of experience encouraging youth to share their voice and empowering staff to provide interest-based learning opportunities for students. “I believe in striving for excellence. I believe in providing students every opportunity to learn. During the remote learning phase this past spring, the staff of BFA showed their dedication to
their students, and their willingness to go above and beyond; I feel privileged to be able to work with them in the years to come.”